Needless to say, this review of “Midnight Club: Los Angeles” is long overdue; I have been writing it for a while, but a few issues had my opinion flip-flopping like politicians with pending indictments. So, finally, here are my complete and final thoughts on the game:

It’s roughly 10:30 P.M., and I’m driving around Los Angeles bumping The Game and feeling mighty nice. I need to make a right on Wilshire Blvd, so I get over in the far right lane. The moon is full and bright and I pass a few women who I assume are night club rejects; I prepare to brake and reach down for the turn signal and… After a couple of swipes at pure air, I get the hilariously shocking realization that I’m still just a North Carolina apartment dweller with a need for loud music, fast cars, and video games. Since my Suzuki isn’t getting me anywhere too swiftly and most of the other games in my collection don’t mesh too well with Hip-Hop, I’ve been spending a lot of time with “Midnight Club: Los Angeles.”

Needless to say, I am a big fan of driving games; I feel like I have a connection with them that I don’t have with many other games. It’s probably because I spend much more time driving in real life than I do sword fighting, casting flame spells, and popping off AK-47s. Even with that in mind, I still feel like this is a game for almost everyone over 13 years of age (Midnight Club: Los Angeles is rated Teen by the ESRB). 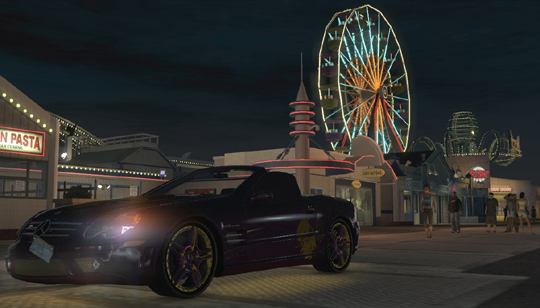 The first thing most people will notice about “MC:LA” is its’ style; that’s what really grabs you, and pulls you in, in those first few hours with the game. For the scenario above I was pulling tracks from my Media Center PC, but the game’s soundtrack is definitely fitting; of course, that’s an area where Rockstar rarely has problems. The city is beautifully presented, with plenty of big recognizable landmarks that will eventually be very helpful during races. People are constantly walking the streets and the traffic patterns seem realistic, but thankfully much lighter than real L.A. traffic. The navigation system (which is great), customization tools, and a bit of performance tweaking, all round out the expected street racing atmosphere, making it all is very believable. My only presentation complaint is that the dialog can be a bit patchy; well-place wit and sarcasm is often followed with goofy usages of outdated-slang. On the graphics side, things are, for the most part, smooth like mayonnaise, but later in the game when you start going way too fast, some texture loading issues pop-up. This may occasionally leave you driving on single colored pavement. Usually, that type of speed ends with you hitting something, so the glitches are short-lived.

This is one of the best parts of “MC:LA,” but for a different reason than you might think. The story is great because it’s not there. There are a couple of cut-scenes spread throughout the “career” mode, but you really only get to know the characters through in-race chatter and cell phone challenges. The motivation to progress isn’t to find out what happens next, it’s to wipe the grin off the guys face that keeps calling your phone and talking trash. This seems much more like a real street racers’ motivation, than love triangles or avenging a lost loved one. The end game reward is satisfying, in most cases, and since you weren’t playing for the story anyway, you are much more likely to keep racing after it’s over.

The driving is done well, which is essential. It’s not too arcadey, so brakes are necessary at really high speeds; but it’s not so realistic you are losing control in every turn. You are constantly forced into tough situations, but the game is much more forgiving than you would expect. Plus, you have help in the form of special abilities that you can activate for a short time to clear the road, make you invincible, slow down time, or shut down the engines of the cars around you. Many of the races let you choose the difficulty so even though you may be frustrated by some races, you can take the easy way out for others. The camera views are also very well done as the new Action Cam does a good job being cinematic and playable at the same time, even though the cockpit view was my personal choice. I used the cockpit view because it feels so much more natural with the steering wheel controller that I played a majority of the game with. If you own one, a steering wheel is good option for the most part - the force feedback seems almost random, but the button mapping and steering sensitivity can be tweaked to your liking.

Progression is a little strange because they never really tell you how it works. I may just be an idiot, but I had almost completed the game before I understood when and why I was receiving upgrades. The “Rep” system has you earning points through tiers, but I never knew how many tiers there were and, therefore, how much more I had to play. Eventually, filling up your “Rep” and achieving “Idol” status does actually trigger the last set of races.

I should also mention that the cops are a fun addition, but sometimes annoying. During the first quarter of the game, when you are too slow to out run them, and too broke to pay your fines, running into them can be devastating. The fines are time based, so spending too long trying to evade the boys in blue really keeps you on your toes. The chases can get exciting, but when you are deeper into the game, and just trying to get races done, avoiding them is just a pain.

Now, don’t start thinking about the end of the game already, because this game is really about the journey. For most people this journey will be quite lengthy - in the end, I ended up with 260 completed races, and that is the best measure I can give, since “Rep” is earned even when you lose races, evade cops, and play online. During most of the game your mission log will have between 10-20 “story” events to choose from, with those varying between the different race types, and a few of them requiring a specific car class or style (tuner, muscle, luxury, or exotic). You will have to drive to a specific location for each event, but there are usually enough to choose from so you don’t have to drive far if you don’t want.

In addition to “story” races and events, you will also run into a bunch of random street racers cruising through the city that you can challenge with a quick flash of your high-beams. Race types range from the oh-so-enjoyable Highway Sprints, to the out-of-place Payback series, which asks you to bang up a few cars for their owner’s unpaid debt. The game wasn’t made for this race type, and it is only made worse since it falls in the deep dark shadow of the “Burnout” Series staple, crash-em-up gameplay. With the exception of Payback, all the other events are fun and challenging.

If you are looking for a game to take up a big chunk of your time than “MC:LA” is a good choice. If you enjoy street racing and customizing cars, you can spend a lot of time here. Of course, Rockstar threw in a set of 60 hidden collectables that unlock cheats. The Goal Attack mode which requires you to complete each race route with target objectives. Each race has the same 4 objectives (1st Place, Target Time, Below 25% Damage, Complete 3 Objectives in a Single Race), which is less than creative, but it won’t be easy to do in most cases. As with most modern games, the replay value rests largely on Online Multiplayer and “MC:LA” does a great job here, because it supports up to 16-players in Cruise mode (8 w/ traffic), utilizes the Race Editor, and has the standard race types with plenty of alternate event types (Basewar, Splitbase, Capture the Flag, Stockpile, Keep Away). With all those options you should never run out of things to do.

For me, it is the small details that really make games special. Here are a few of the things that I think give even more value to an already great game.

I recommend “Midnight Club: Los Angeles” to anyone who is, was, or wants to be a fan of street racing.