So, I just got done with a 6-hour-long session with “LittleBigPlanet,” and all I can say is, “WOW.” I know, the game has been out for months now, but it came out amidst a barrage of other fall blockbuster titles like “Resistance 2,” “Fallout 3,” even “MK vs. DCU.” These high profile releases all came out around the same time that Sony’s fresh, little platformer emerged on store shelves. So while it’s been out for quite some time, I haven’t been able to spend very much time with it, until now.  And since I’ve never officially done a review for the game (but 2.o did before my time on T.G.H.) I will point out a few reasons why you should, if you haven’t already,  go pick up this phenomenal game immediately.

“LittleBigPlanet” is by far the most adorable, lovable game I’ve ever played. Honestly, the charm each unique Sackboy (or girl) delivers onscreen is about as entertaining as it gets. Couple that with the hilariously dry-witted English narrator made me laugh out loud more then a few times, and this game has a look and feel to it unlike anything I have ever seen. Besides, how can you resist a face like this? 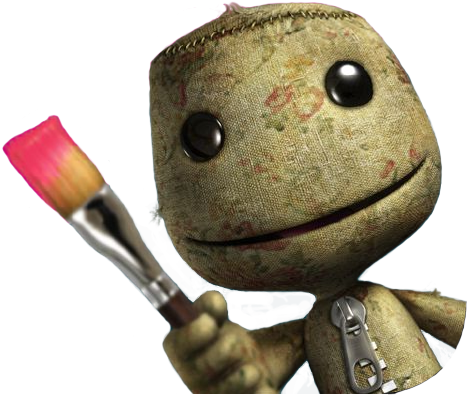 “LittleBigPlanet” not only allows for cooperation, it demands it.  While all of the levels can be played alone, many of those levels have areas that can only be accessed by two, three, or four people. Accessing each of these areas gives you prize bubbles that offer items or stickers that help in your own level creations. Aside from gaining various items, choosing to not go at it alone can garner you more points in certain levels quicker then if you were solo. Lastly, playing “LBP” with friends it’s just way more fun.

3) Anything is possible in imagination land:

The real reason to buy “LBP” is the fantastic amount of customization that the game offers you. Not only can you earn/buy hundreds of items to customize your adorable, little sackboy or girl with, but “LBP” has one of the most in-depth levels editors you will ever experience. While there is a lot to learn on how to make all of LBP’s features work, persistence pays off, and if you can take the time to fully understand the tutorials, there is no limit to what you can create. Going online and seeing the creations of other “LBP” inhabitants is truly remarkable, and every time I play someone else’s creation it drives me to make something just as memorable.

“Rock Band” and “Guitar Hero” make appearances on XBLN and PSN almost every week, and “LBP” isn’t too far behind. There have been a number of updates for the platformer since it’s erlease last November, and Media Molecule have promised that there are more or on the way, including the much anticipated “Killzone 2″ and “FFVII” packs. Having these updates with an already impressive package of unique content makes “LBP” a must-have.

Finally, “LittleBigPlanet” offers a sense of community that no other game I’ve played does. At no time are your trying to out do others, rather, you often find yourself praising other individuals for their creative achievements and remarkable ideas. You really do want everyone to keep creating and come up with the next must play level for the game, and, in the end, that is “LBP”’s greatest achievement; creating a title that offers a level of cohesiveness between players unmatched in any other console game to date.