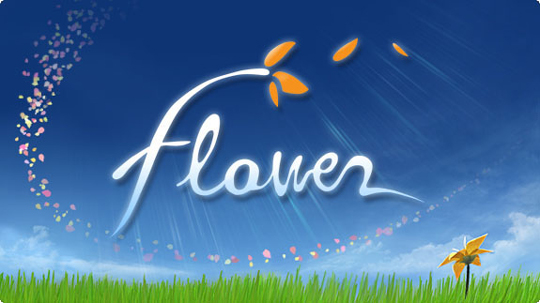 I hope everybody has done their Valentine’s Day shopping already, but if you haven’t there is still hope. Flower shops around the country are counting their money already and laughing at the people knocking at their doors. Thankfully, you were blessed this past Thursday with a lovely video game substitute when thatgamecompany (the creators of “flOw”), released “Flower” on the PSN.

“Flower” has you controlling flower petals with gentle/moderate breezes around rocks, across open fields, and through gaping valleys with the Sixaxis Motion Controls.  You start each scene with one petal and you pick up more and more with each flowers path that you cross. I have only played through the first few levels so I don’t really know what the overall objective is just yet, but I can guarantee that you will feel like you have a purpose through each level. I was bit fascinated by the level design, which seems like the place where thatgamecompany put plenty of thought. The game looks and sounds so wonderfully pleasant, I would say it is more soothing and seductive than their earlier release. I can’t say much more since the games attractiveness is much more subconscious than I expected.

As an experiment, I choose not to jump right into the game after it was installed on my PS3. Instead, I let a more casual gamer take a stab at it first. This person had no knowledge of the game’s existence before they started playing, so her impressions were completely isolated to her in-game experience. As she embarked on “Flower”’s journey I just sat back with zipped lips and watched. The session lasted about 45 minutes and I noticed quite a few interesting things. She spent the first 5-10 minutes just fiddling with the controls. I assume the idea of being the wind was pretty strange at first so this seemed natural. But after this short period of time, her command over the petals had improved enormously. Another issue was more contained to myself; I kept wanting her to finish the level, but she just kept skipping past flowers and pulling loops and playing with her ridiculously long petal trail. She eventually completed the level and another after that before quitting. Thats when I asked the most completely vague question ever, “So, what do you think?” Her response was brief, “I like it. Obviously it’s beautiful, but I like it because it makes me feel good… There is no pressure to finish and I almost want to slow down and watch every flower bloom.”

Now, I’m sure “Flower” isn’t for everyone. I can say that this game isn’t gender biased at all, since I felt most of the same emotions as my female guinea pig. If you want to play a game and completely relax yourself at the same time, “Flower” should do it easily. Plus, the simple fact that it’s only $9.99 on PSN should put this game on everybody’s radar. If you are just too cheap or you don’t have a PS3, thatgamecompany has another game called “Cloud” which is currently free to download and play on your PC. Just know, you will be missing out - I left my PS3 on overnight, and I swear this morning I heard my PS3 shout, “CUPID, YOU AIN’T GOT NOTHING ON THIS!”